The trip is from New River, West Virginia, to Stinking Creek, Tennessee, by way of Long Key, Florida.

While staying at Skidaway Island State Park we spent a day in Savannah. We used the Hop On – Hop Off tour bus line. They are such a joy to use, I highly recommend them. We parked in their lot, then didn’t have to worry about driving our motor home in heavy traffic on unfamiliar streets, or about finding sights we wanted to see, or about discovering interesting sights we hadn’t heard of, or about parking a 23 foot long vehicle. You buy a day pass. Their buses circle through a route that has stops at all the major sights in the city. You can get off at any of these stops, spend as much time there as you want, then catch the next bus. They come by every half-hour. While you are on the bus the driver tells you all about Savannah. A relaxing and enjoyable way to see a city. We rode the bus through the entire circuit once to decide what we wanted to see. On the second go around our first stop was the waterfront.

See how the waterfront is below street level, with stairs giving access to the lower level? There are warning signs on them that you are using them at your own risk. Apparently very risky.

There are several interesting statues.

Unfortunately, the most famous one, Bird Girl, which was on the cover of the novel ‘Midnight In the Garden of Good and Evil’, has been moved inside to protect it, so we didn’t get to see that one. So here is an image I found on the Internet. 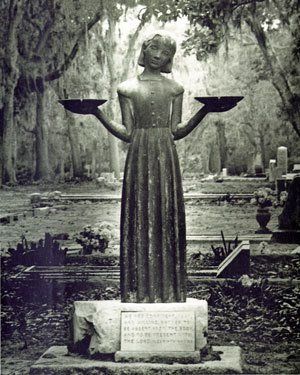 We spent most of our time at the waterfront. We ate lunch at a seafood restaurant with an interesting light made of clam shells.

We also got off at several city squares. These little parks are spread all over Savannah.

There are many interesting old buildings. The tour guides on the bus will tell you the stories behind each.

This was where Robert Louis Stevenson lived while writing ‘Treasure Island’.

And the inn next door he frequented. Note the pirate flag.

After a long day touring Savannah we drove back to Skidaway Island to crash.